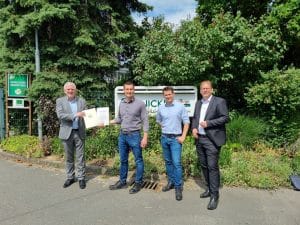 A good 1.3 million euros are being invested in Germany’s largest agrophotovoltaic plant in Lüchow. Last Friday, a subsidy check was presented for this innovative project.

Lüchow (nd). “Our goal is to produce climate-neutral by 2030,” Robert Lettenbichler explains the motivation to act as a pioneer. For the managing director at Steinicke’s “Haus der Hochlandgewürze” in Lüchow, it is essential, if only from an ideological point of view, to focus on alternatives to power generation.

“The technology fascinated us,” Robert and Michael Lettenbichler agree. A small plant already stands in southern Germany. In Lüchow, one hectare of fields is to be equipped with an APV (agrophotovoltaic system). The advantage is that the area will produce environmentally friendly electricity and at the same time crops can be grown underneath. The Lettenbichlers have chosen chives. The reason is a practical one: chives are a bulbous plant that is perennial. “It is already a big effort to farm on such an area,” Michael Lettenbichler estimates. The modules do allow machines with a width of up to 18 meters through, but that is too little for irrigation, for example. “We are still working on a solution there,” says the businessman.

For the “Haus der Hochlandgewürze,” an APV is extremely attractive. This is because the electricity generated in this way is needed in the factory where dried vegetables and herbs are produced. “It is an innovative and forward-looking technology,” the two managers agree. Until now, farmers have used the roofs of their barns for solar installations. With an APV, there are completely new possibilities for making multiple use of existing and increasingly scarce areas. The building permit for the Lüchow APV was granted for a research facility, which is limited to ten years. In cooperation with nature conservation associations, research is being carried out to determine, among other things, what effects the plant will have on plants, as well as insects, deer, birds or mice. “The cooperation with the local authorities has worked very well,” the entrepreneurs praise. The application process was not easy for either side. Because in Germany, not everything for plants of this kind is still far from regulated. Soon regulations at the federal level are expected.
A symbolic check for 400,000 euros was presented by Jochen Flasbarth, Parliamentary State Secretary of the Federal for the Environment, Nature and Nuclear Safety, in his luggage last Friday. “Without this funding,” admits Robert Lettenbichler admits, “we would not have we would not have dared to do it. The project is the project is too big.” The Lüchower plant is special – and not only because of its size. The plan is to use all the electricity to consume the electricity itself. For this requires special technology. The managing directors expect to have the plant the end of this year. the plant at the end of this year. Then it will be to take a close look, collect data collect data, document and and analyze. From this experience, the following APV operators can profit will be able to benefit.
For the internationally active company, the energy transition is an is an important topic. The Lüchow company is competing competition – but under more difficult
conditions: Keyword Co2 tax. “We hope that we can get through this well,” says Michael Lettenbichler. Because competitors in China, New Zealand in China, New Zealand or South America do not have to pay this tax. And such competition is not really fair. competition is not really fair.

this project is being carried out by: